Compelling Seneca’s quotes for a happy and meaningful life 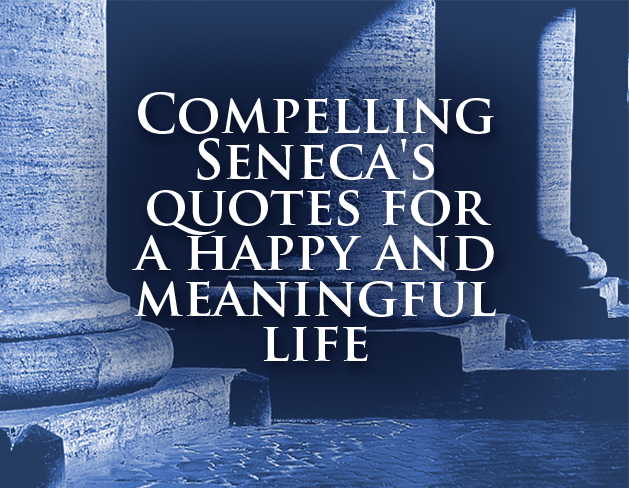 Discover brilliant and highly inspirational Seneca’s quotes and words of wisdom on all aspects of life – anger, wisdom, love, shortness of life, virtue, happiness and living every day as if it’s your last!

Lucius Annaeus Seneca was Roman statesman and philosopher who made a lasting contribution to Stoicism, a philosophy that flourished for 480 years in Ancient Greek and Rome. He wrote more than 20 books of practical advice on all aspects of life and is the author of many inspirational quotes and words of wisdom we love and cherish today. Like many Stoics, Seneca emphasized that the key to a virtuous life is freedom from passion. The wise man will not allow grief, misfortune, joy or any other excessive emotion to distract him, he will act on his principles, not on his mood, no matter what life throws at him. He will attain inner peace by overcoming adversity, being aware of our impulses and practicing self-control. This belief is similar to the meaning of what we think when we say “stoic calm”.

Seneca was born in Cordoba Spain, but lived most of his life in Rome, during one of the most turbulent and dangerous times in Roman history. From an early age, he was interested in philosophy and thoughtful way of life and his interest steered him away from an active political career. Up until, against his will, he had to take on the most dangerous and dreadful job in the Roman court: tutor to a 12-year-old boy, future emperor Nero, the notorious dictator who slept with his own mother and eventually had her killed, raped young boys and turned Rome into ashes blaming Christians for the fire.

From his early age, it was evident that Nero was a bloodthirsty psychopath. When he became emperor at age 17, Seneca’s role as the court tutor turned into a position of the emperor’s advisor and speech writer. Seneca knew he was in a very dangerous situation and tried to retire from the court. Twice he offered Nero his resignation, but Nero refused both times. Eventually, he was charged with complicity in the failed Posinian conspiracy to murder Nero, and was forced to commit suicide in front of his family. To the end, Seneca claimed he was innocent, and he may even have been telling the truth. Although he died a tragic and disputed death, his works and words of wisdom live to this day.

Seneca was one of the best thinkers and philosophers of his time, and his knowledge is just as applicable today as it was many centuries ago. Here are some of the best Seneca’s quotes that will inspire you to find inner peace, seize the moment, properly use the time that you have on this earth, choose a happy rather than unhappy existence, free yourself from anger and other strong impulses that may be harmful to you and be thankful. And if you like reading quotes from other famous philosophers, check out what Socrates and Lao Tzu had to say about life.

best Seneca’s quotes about anger, happiness, and living life to the fullest 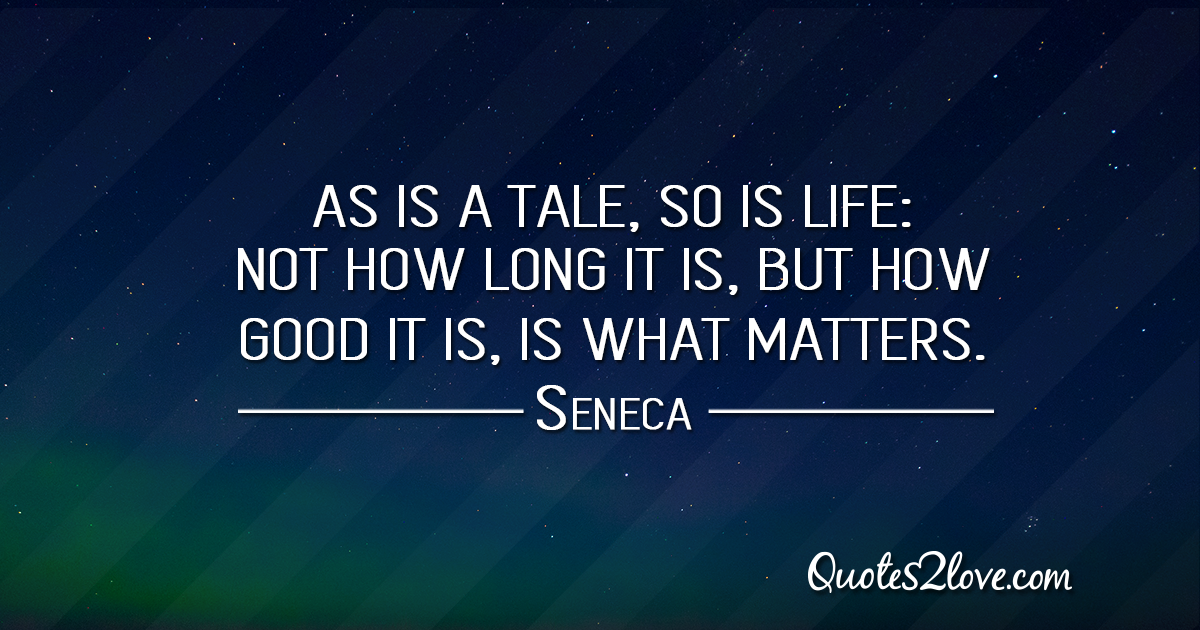 As is a tale, so is life: not how long it is, but how good it is, is what matters. – Seneca

True happiness is to enjoy the present, without anxious dependence upon the future, not to amuse ourselves with either hopes or fears but to rest satisfied with what we have, which is sufficient, for he that is so wants nothing. The greatest blessings of mankind are within us and within our reach. A wise man is content with his lot, whatever it may be, without wishing for what he has not. – Seneca 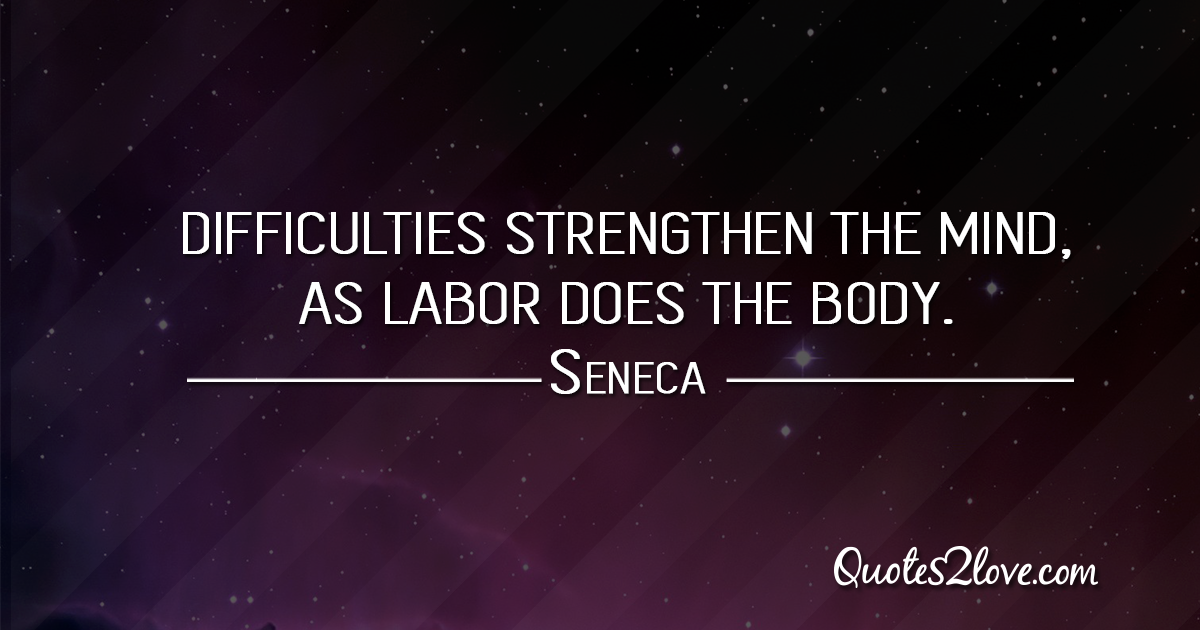 Difficulties strengthen the mind, as labor does the body. – Seneca

All cruelty springs from weakness. – Seneca 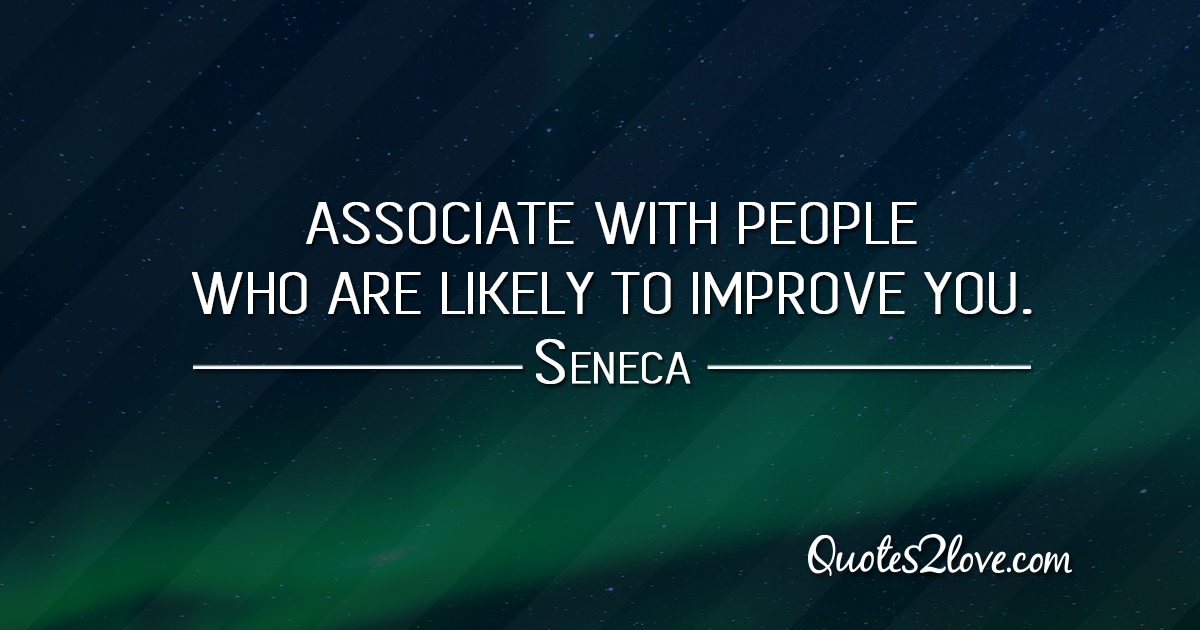 Associate with people who are likely to improve you. – Seneca

It is not that we have so little time but that we lose so much… The life we receive is not short but we make it so; we are not ill provided but use what we have wastefully. – Seneca 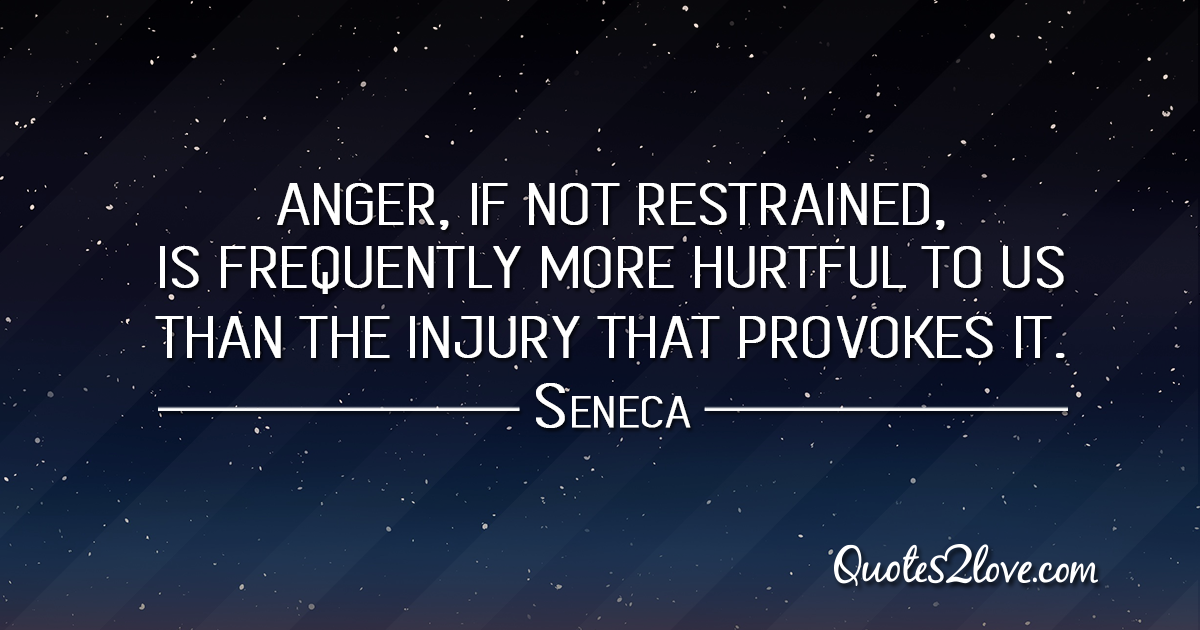 Anger, if not restrained, is frequently more hurtful to us than the injury that provokes it. – Seneca

He who is brave is free. – Seneca 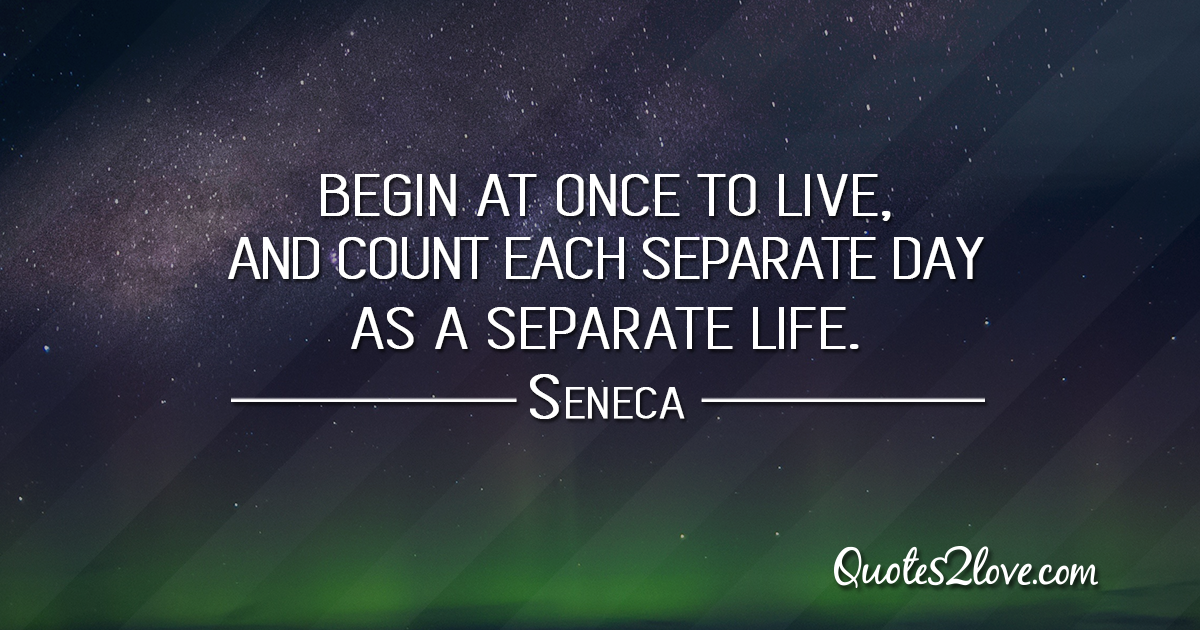 Begin at once to live, and count each separate day as a separate life. – Seneca 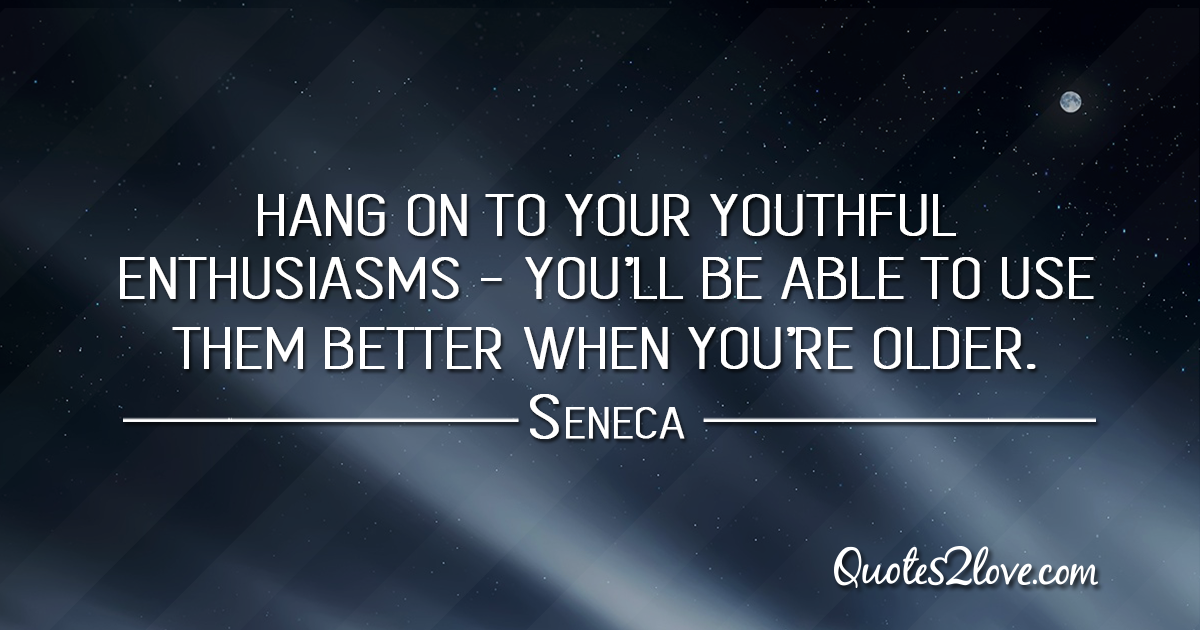 Hang on to your youthful enthusiasms — you’ll be able to use them better when you’re older. – Seneca

He suffers more than necessary, who suffers before it is necessary. – Seneca 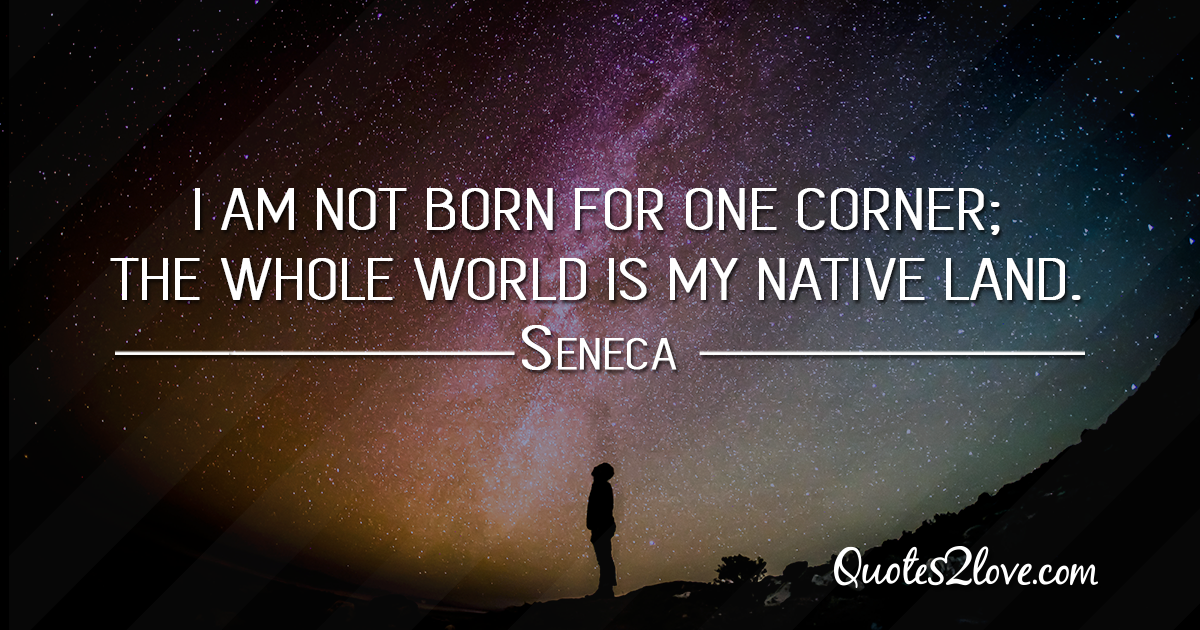 I am not born for one corner; the whole world is my native land. – Seneca

Life is like a play: it’s not the length, but the excellence of the acting that matters. – Seneca 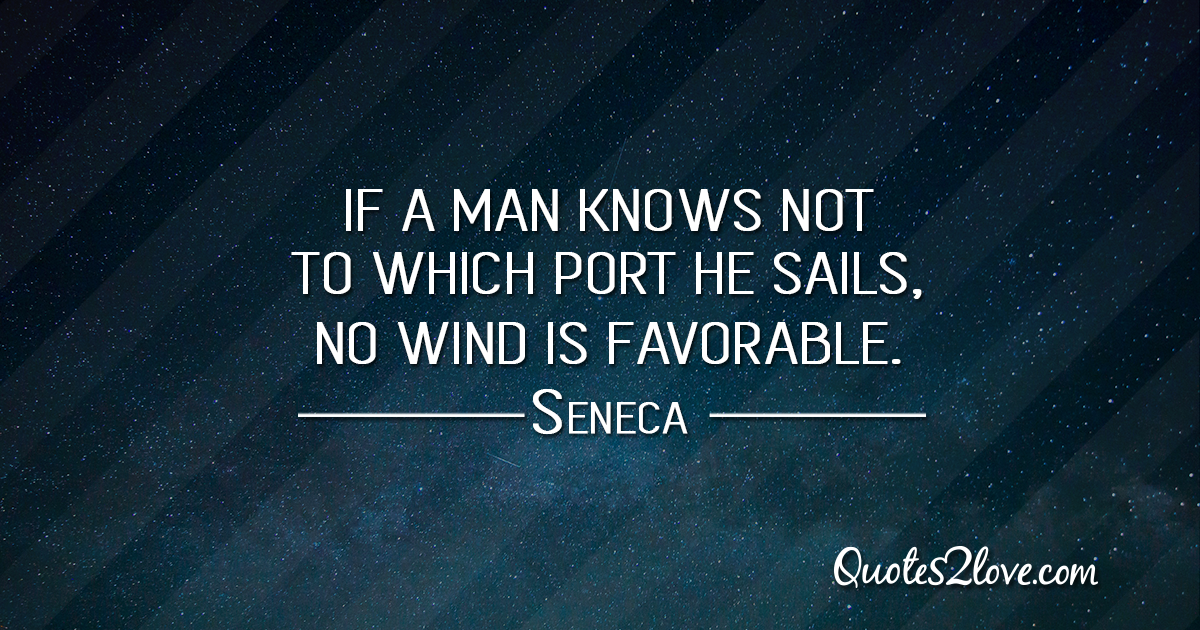 If a man knows not to which port he sails, no wind is favorable. – Seneca

Wealth is the slave of a wise man. The master of a fool. – Seneca 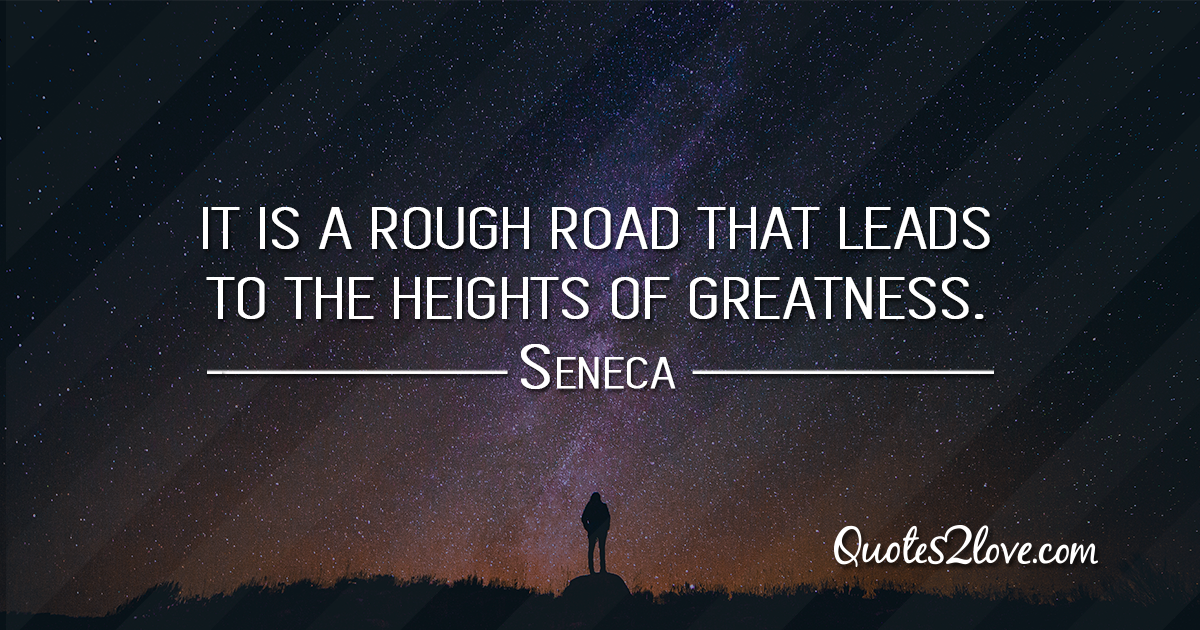 It is a rough road that leads to the heights of greatness. – Seneca

If you really want to escape the things that harass you, what you’re needing is not to be in a different place but to be a different person. – Seneca 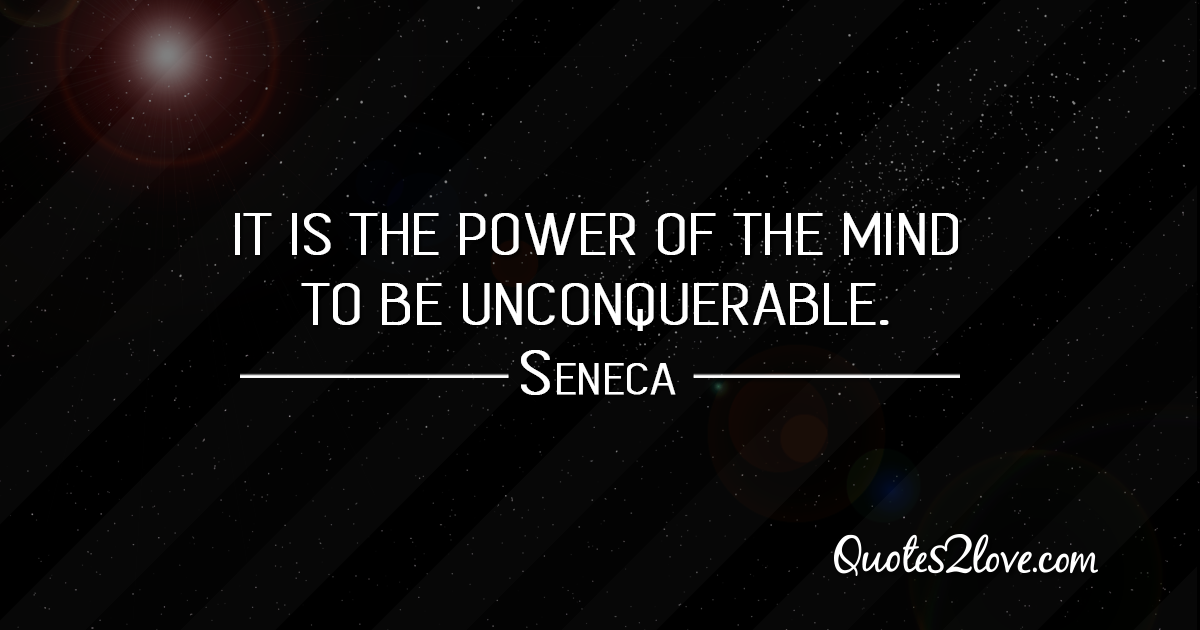 It is the power of the mind to be unconquerable. – Seneca

Putting things off is the biggest waste of life: it snatches away each day as it comes, and denies us the present by promising the future. The greatest obstacle to living is expectancy, which hangs upon tomorrow, and loses today. You are arranging what lies in Fortune’s control, and abandoning what lies in yours. What are you looking at? To what goal are you straining? The whole future lies in uncertainty: live immediately. – Seneca 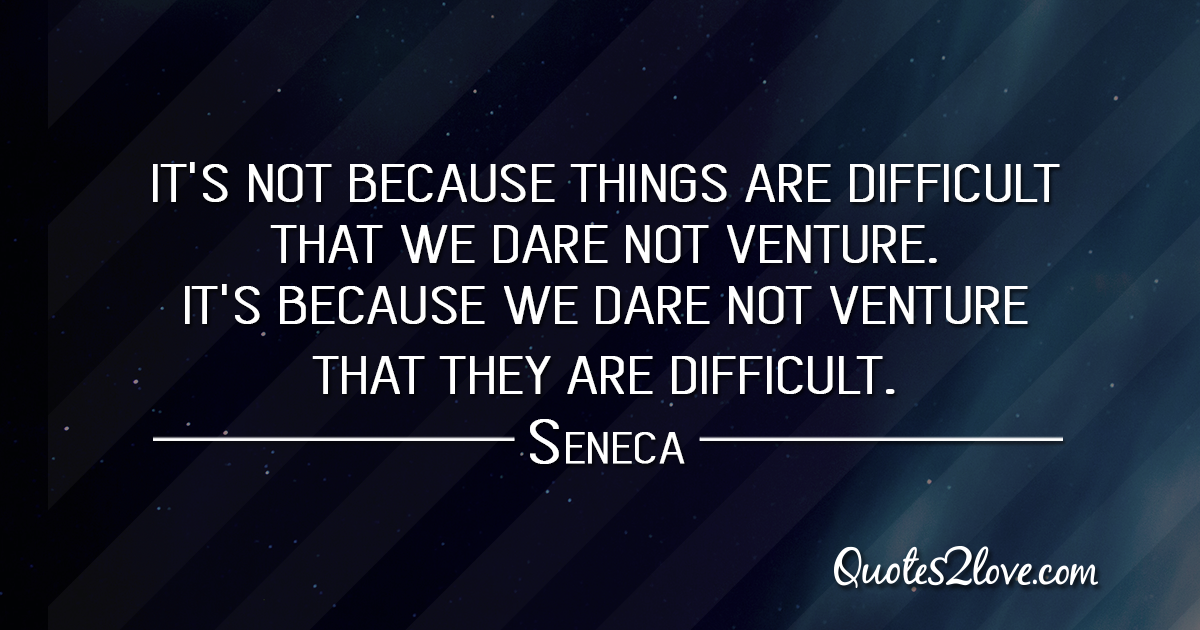 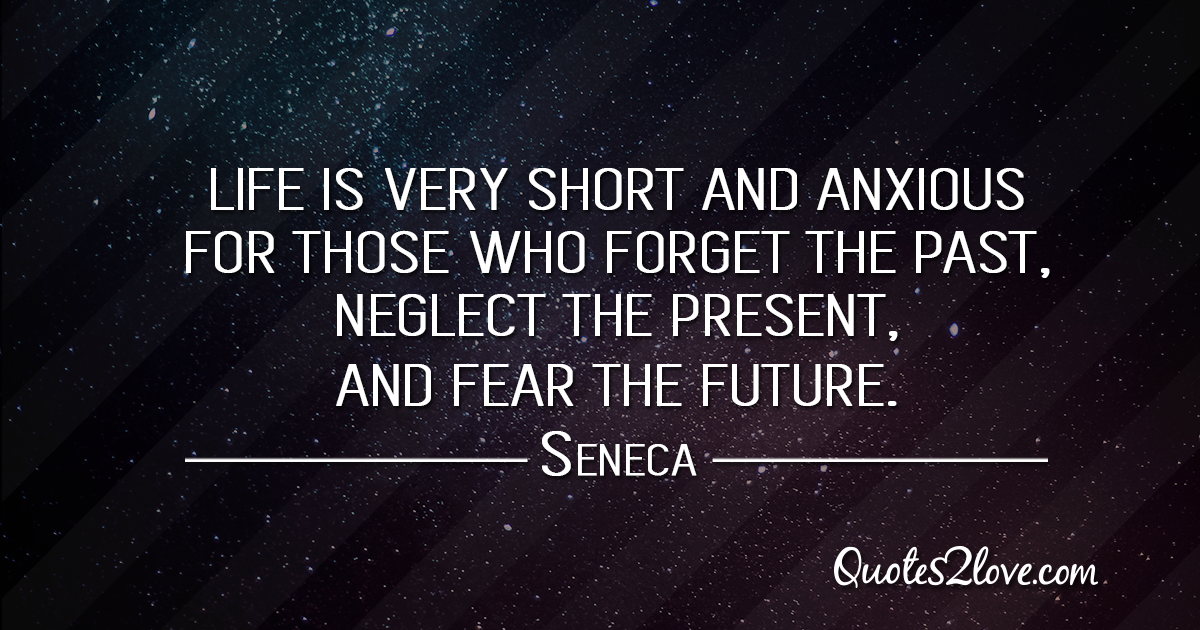 Life is very short and anxious for those who forget the past, neglect the present, and fear the future. – Seneca

If you wished to be loved, love. – Seneca 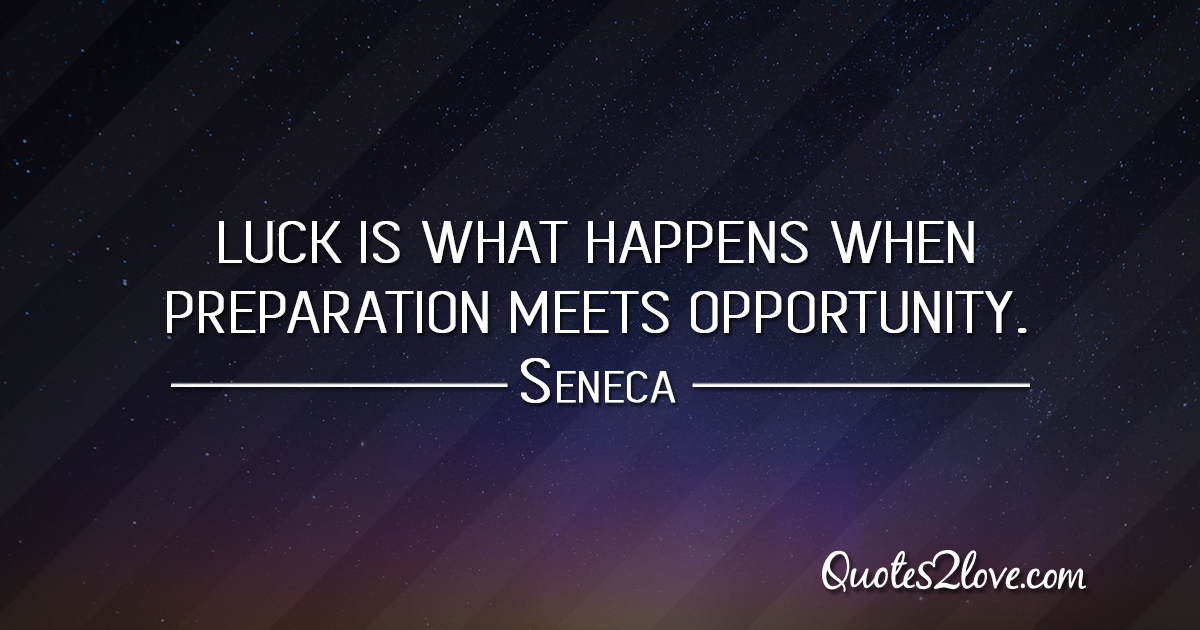 Luck is what happens when preparation meets opportunity. – Seneca

I shall never be ashamed of citing a bad author if the line is good. – Seneca 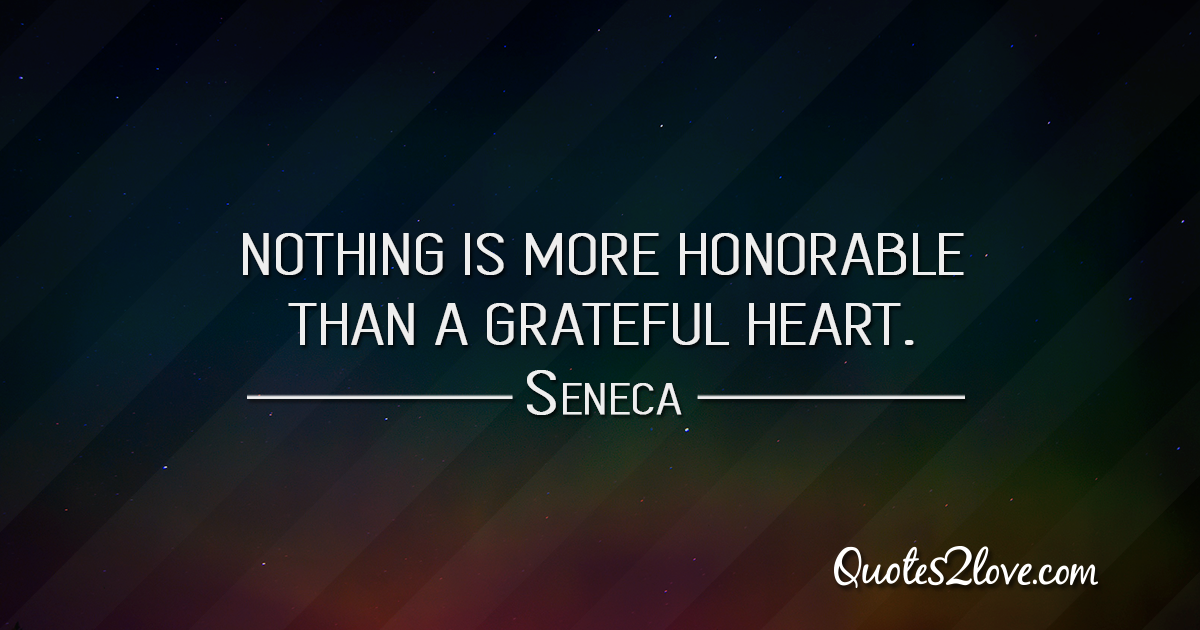 Nothing is more honorable than a grateful heart. – Seneca

One of the most beautiful qualities of true friendship is to understand and to be understood. – Seneca 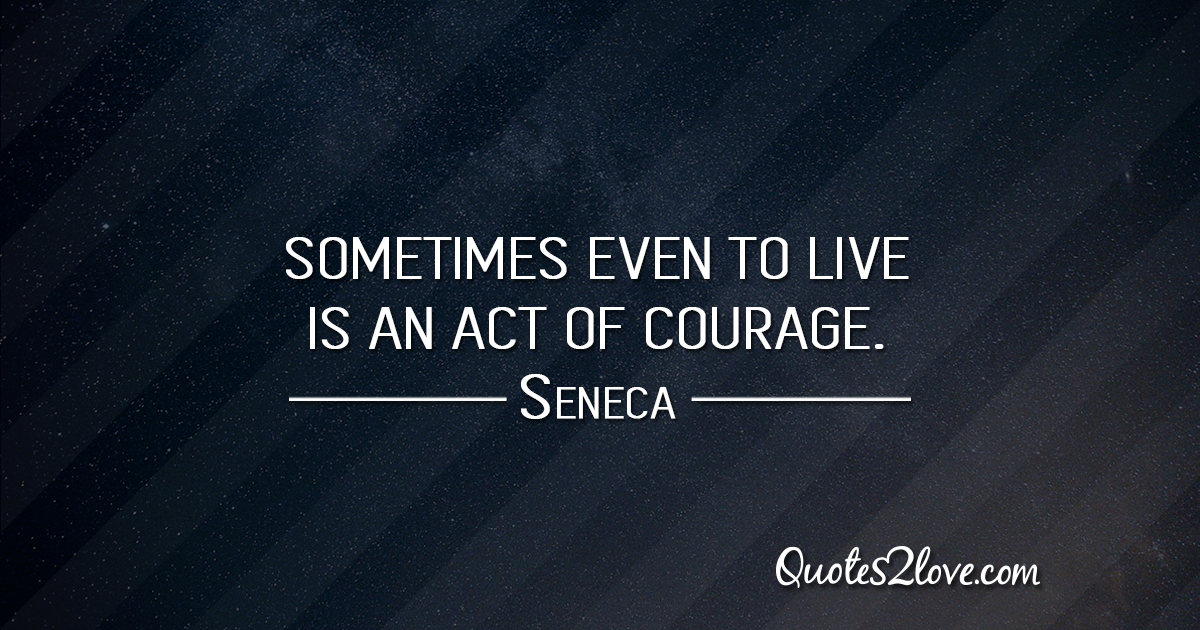 Sometimes even to live is an act of courage. – Seneca

Wherever there is a human being, there is an opportunity for a kindness. – Seneca
The greatest remedy for anger is delay. – Seneca 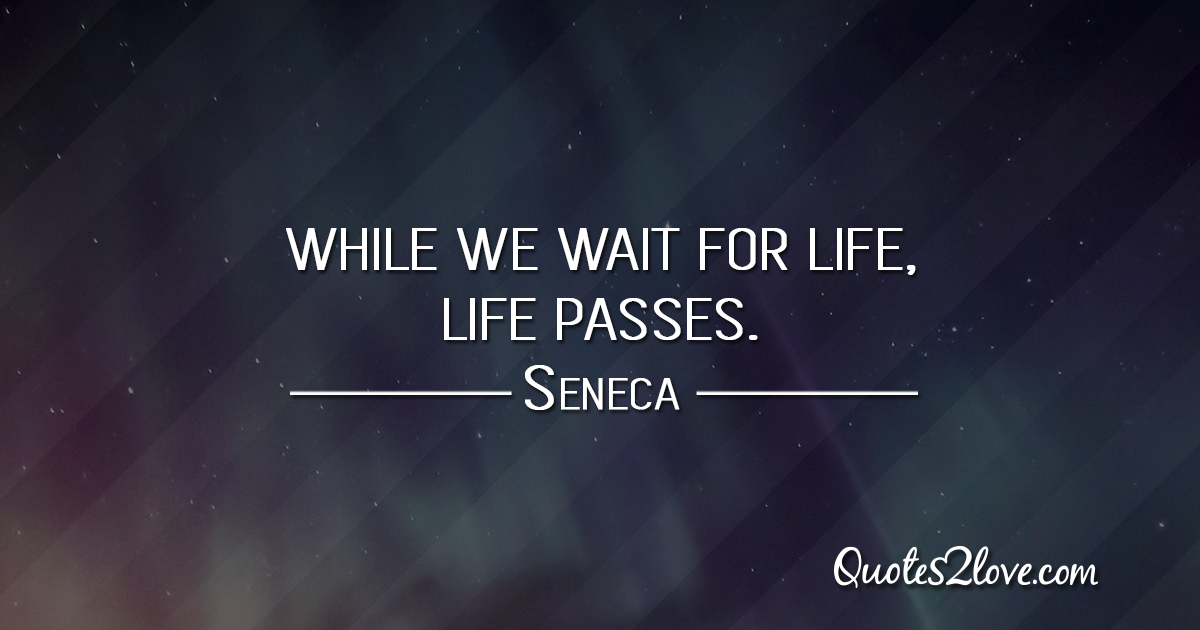 While we wait for life, life passes. – Seneca

A gem cannot be polished without friction, nor a man perfected without trials. – Seneca
While we are postponing, life speeds by. – Seneca

Aug 20, 2016quotes2love
Best Michelangelo's quotes about art and what it means to be a true artistJohn Muir's quotes about nature that will inspire the adventurer in you